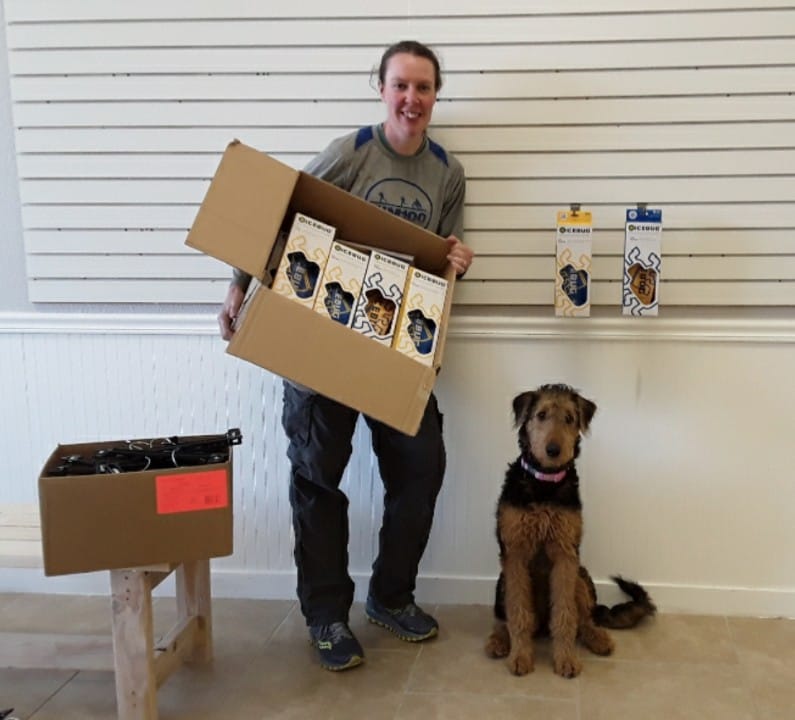 Note: In July 2020, our posts focus on the successful marketing of Frosty Feet Running Company’s store opening in the midst of a pandemic. The series outlines the strategies Pagesculptor Studios and Frosty Feet developed to communicate with potential customers during a mandated closure of all non-essential stores in Alaska.

The Alaska Department of Health and Social Services reported the first COVID-19 case on the same afternoon Frosty Feet owner Stacy Fisk dropped by my house to scan vendor applications. Days away from finalizing her small business loan, she had started setting up her storefront on the west side of town. Not long after, COVID-19 cases in the Fairbanks North Star Borough increased rapidly. During March, the borough reported 1-6 new cases a day.

Opening a run store was a long-time dream for Stacy. She graduated in 2003 from Mars Hill University with an impressive list of wins; and joined the coaching ranks as race director and assistant coach for the cross country and track & field programs after graduation. When she left in 2007, she continued to compete in Ironman Triathlons, Ultramarathons, even hiking the Appalachian Trail. For several years she worked shoe retail in Fairbanks, Alaska where she became extremely involved in the run community, and eventually the race director for the famous Equinox Marathon. In March, the South Atlantic Conference (SAC) announced that Stacy was one of 5 athletes to be inducted into the 2020 Hall of Fame Class.

Long before the pandemic, back in Fall of 2019, people would stop me at the market and ask about rumors that Stacy was opening a run retail store in Fairbanks. Though I already knew the answer, Stacy wasn’t ready to make an official announcement until early winter. However, once the word was out, people wanted to know details about her progress. We set up a Facebook page for Frosty Feet in mid-January. Within months she had 400+ followers.

Our early campaigns updated followers about potential opening dates, store renovations, and the unveiling of the Frosty Feet logo. Around this time, the first cases of COVID-19 in Washington state hit the news. Then California. Eventually it made it’s way to Alaska. At first, the pandemic affected Stacy in small ways. She and her co-race director cancelled the White Mountains 100. Then the closure of the FNSB Library where she would use business-related facilities until her retail store was fully set up. Soon she suspended the Thursday Night Beer Runs that had gone on for 3 uninterrupted years because she could not assure social distancing.

On the occasion we would joke that she had “picked a great time to open a business.” But I never doubted Stacy’s ability to be ready by mid-April. Then on April 4th at 8:36 am, a day after our state issued the first in a series of COVID-19 mandates, I received a text filled with disappointment:

The news came as a shock since the state deemed bicycle shops as essential since they serviced a form of transportation; however, runners and walkers were not given the same consideration.

“There were places identified as essential and I didn’t understand why we weren’t,” says Stacy. “Especially, when I could provide shoes for medical staff and anyone who went going outside to get exercise during quarantine.”

Stacy knew Frosty Feet wouldn’t open until May or later. Shoe warehouses had also closed down and Frosty Feet’s pending inventory was in limbo. We agreed the store needed a communication strategy that would keep followers and potential customer’s engaged. However, we didn’t want to create irrelevant content without a reason. So we decided to focus on communicating with followers who had previously used Stacy’s expertise to purchase shoes. It was a virtual word-of-mouth campaign that happened via emails, texts, and direct messaging.

“We definitely focused more on word-of-mouth marketing and reaching out to individuals on Facebook,” says Stacy. “People knew the store was opening so they had questions.”

20 days later when the mandate lifted, Stacy knew she needed to open as fast as possible. She urged vendors to get shoes, gear, and nutrition delivered ASAP. While waiting for inventory, she held a Facebook Live Quaran-training Q & A session with Team RWB member Chris Oliver where they fielded question about training safely during a pandemic, updated people about the store’s opening, and promoted products the store would feature. The social media campaign shifted gears back to the store’s progress and a potential opening date.

By June 1, everything was in place to open. Despite the uncertainty, long wait, and extended pandemic, people were ready to spend at Frosty Feet. Only a fraction of this came from timeline updates to the Facebook page. A majority came from Stacy’s excellent reputation as a runner, coach, and solid knowledge of the shoe industry, coupled with her willingness to keep in touch with her followers through direct messaging. In our next post we’ll look at how Stacy tailored Frosty Feet’s opening to keep customer’s safe during the pandemic.

Sign up for our newsletter (form in our menu) so you don’t miss out!